You are here: Home / Surgery / GALLSTONES

Usually, only surgery can help with cases of reoccurring or chronic gallstones. For gall surgery, Dr. Kisser almost exclusively uses the laparoscopic technique, and in some cases scarless laparoscopy through the navel. The recovery process is quick, and surgical scars are hardly visible.

1 in 5 women and 1 in 10 men over 40 have gallstones, which means women are more affected. Theories suspect the female hormone estrogen to be a risk factor.
Obesity, genetic disposition, liver decease, and diabetes also contribute to the risks of gallstone development.

What are the causes gallstones to develop?

The gallbladder stores bile, which is produced by the liver. When the different components of bile are disproportionate, they can form clumps that later evolve to be gallstones.

In their early stages, gallstones do not cause much pain but can still damage the gallbladder. They can also cause inflammations of the pancreas, and, in the case of gallbladder wall breakage, inflammation of the peritoneum. The ladder can result in gallstones traveling into the intestine.
Chronic inflammations are the most common gallbladder ailment. The clogging of gall pathways can lead to jaundice and liver damage.

It is possible to identify gallstones via ultrasound. The patient should come in on an empty stomach, as it is easier to spot gallstones when the gallbladder is full. We also examine the common bile duct, since stones may be found there as well.

In order to prevent additional stomach ailments, we recommend a gastroscopy. It is very common for gallstone patients to also suffer from a stomach inflammation or ulcer.

Some gallstones can be treated either by dissolving them with medication or shattering them through shock waves. However, this is only an option for a small number of patients, because it requires the stones to be a specific size, and not calcified. 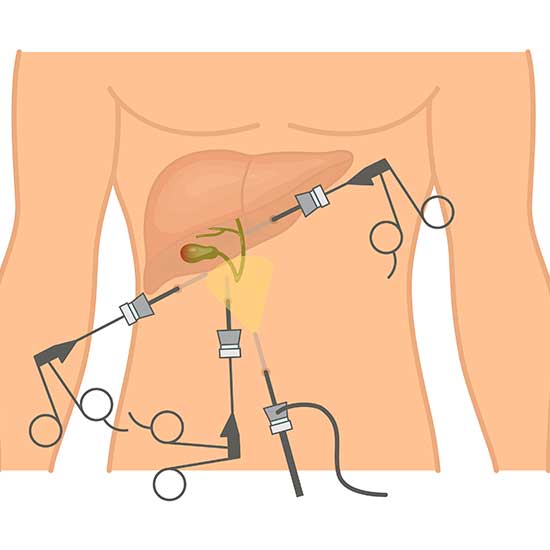 For surgical removal of gallstones, we recommend a laparoscopy. The surgery is minimally invasive, performed with tiny incisions. The goal is to remove the gallbladder as a whole. If one were to open the gallbladder and remove only the stones, new stones would redevelop after a few months, making the entire surgery pointless.

“Dr. Kisser in Vienna has years of experience of performing laparoscopies.”

Life with no gallbladder has no disadvantages, although sometimes patients can have a very thin stool in the first couple of weeks post-surgery. A healthy diet that is rich in fiber is recommended. After a correctly done surgery, some ailments may occur for a number of reasons, such as mal growths or remaining or new gallstones.